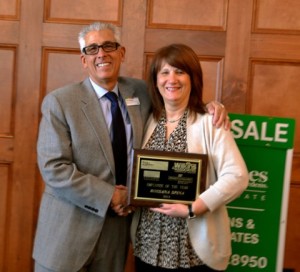 In his opening remarks, Wilkins thanked everyone for attending as well as complimented those who attended for making 2014 a good year for all of the Wilkins organization’s companies in light of the economy.  The Wilkins organization has offices in Stroudsburg, Bushkill, Mt. Pocono and Milford.  The Corporate office is at 404 Park Avenue, Stroudsburg.

Rookie of the Year awards were given to Alex Camaerei, (STBG off), Lisa Heaney (MIL off), and Karen Sherrill (MT POC off).  Christine  Wilkins proudly mentioned the fact that the company had hired over 20 new Agents in 2014 and expected the sales force to grow to close to 90 Realtors by year-end 2015.

Outstanding Salesperson, an award presented to that Realtor showing their dedication to the Real Estate profession based on the purpose, principles and goals of Better Homes and Gardens Real Estate and an Agent who is helpful to his or her other Agents, easily approachable and respected for their hard work and dedication.  This prestigious award was presented to Carol Demarest (BK off), Caryn Centini (BK off), James Martin (STBG off), Sonia Kern (STBG off), Bill Schutte (MIL off) and Jennifer-Lynn Amantea (MT. POC off).  Said Dennis Mooney, V.P./Sales Manager, “These Agents worked hard for this award, and the truth of the matter is they deserve it.”

Said Christine A. Wilkins, “The Top Ten Salespersons for 2014 included a lot of Realtors that may not have been considered in the past.  To me, it was very rewarding to watch their volume increase for 2014.  Appreciate, it’s not only the volume, it was the individual agent handling those accounts with such professionalism, it simply turned into sale, and a lot of them!”

The Top Team for the year was presented to The Carl Maurer Team, with $29.5 million in sales.  The Carl Maurer Team consists of Carl Maurer, Assoc Broker and Team Leader, Dennis Farrelly, Realtor, Caryn Centini, Buyer’s Agent and Donna Sorrentino, Admin Asst.  In 2013, The Carl Maurer Team won numerous awards both state wide and nationally based on the volume that the Team produced.  Said Wilkins, “Winning awards such as The Carl Maurer Team has won not only in 2014 but in the past, has not come without a tremendous amount of dedication, hard work and a basic labor of love which produces these sorts of numbers.  Obviously, The Carl Maurer Team handles bank owned properties and those are not the high-end part of the Pocono market.  I applaud each and every one of their efforts.”

Top Salesperson of the Year was given to Jennifer-Lynn Amantea, Assoc Broker of the Mt. Pocono office.  Said Amantea, “I was very honored to receive Top Salesperson of the Year.  I just love this industry and am looking forward to 2015.”  Amantea sells homes throughout the greater Pocono region and in addition to that, Amantea sells high-end homes in the Lehigh Valley area as well.  Amantea owns JPA Masonry, one of the largest and most respected masonry businesses in Northeast Pennsylvania.

Employee of the Year, the most prestigious award to be presented, was handed out to Rossana Spina, Exec Secretary to Thomas R. Wilkins.  Spina, who has been with the company for almost 10 years, works in the Corporate office and is the primary Secretary to Thomas R. Wilkins, CEO and Christine A. Wilkins, General Manager.  In her capacity as such, Spina handles a number of key responsibilities for the entire organization including the Title company, Management company, personal real estate holdings and partnerships and, of course, her primary responsibility, Better Homes and Gardens Real Estate Wilkins & Associates.

Said Thomas R. Wilkins about Spina, “When the vote came before the Supervisors to present the award to Rossana, it was unanimous.  Rossana’s interfacing not only with me, but with the company in general simply does not go unnoticed.  We could not have had the year we had without Rossana’s help.”   The award was presented by Thomas R. Wilkins.

The last category was the Helping Hands award.  Recipients of the award included Nicole Murray (BK off), Blanca Cordero (STBG off), Donna Casserly (MT POC off), and Samantha Bonnett (STBG off).

The Helping Hands award is one of the most difficult awards to receive.  That award celebrates the successes of other that benefited through your unselfishness, concern and genuine assistance to a co-worker.  Recipients of the Helping Hands award do not ask to be mentioned or acknowledged.  Everyone knows who a Helping Hands recipient is.  Those award winners, past and present, live by the golden rule and know what goes around comes around.

Closing remarks and 2015 predictions were given by Thomas R. Wilkins, CEO.  Wilkins thanked everyone for their past performance in 2014, complimented the award winners that day and told everyone there that 2015 was going to continue to be a good year as was 2014.  Wilkins closed with “Remember in the beginning of the real estate cycle, we said it was going to be a slow road back.  We said that the market was going to increase slowly but on a very steady pace.  In 2013 and again in 2014, we saw this happen much the way we predicted.  For that reason, we see 2015 echoing that same pattern.”

In addition to their regular business, the Wilkins organization in 2015 has launched a new website — www.BHGwilkins.com, expanded Management agreements in the Lehigh Valley and Scranton/Wilkes-Barre area already in effect and the launching of the Distinctive Collection by BHG which hosts luxury and life-style homes as an actual Division within the Company.  All offices are open 7 days a week. 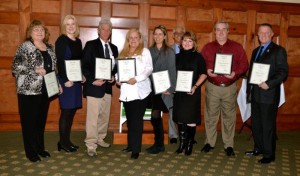