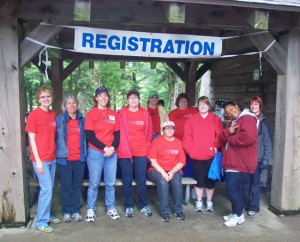 Honesdale, PA – They walked to help others come “out of the darkness,” which is the official name of their annual hike through Promised Land State Park. On May 21st, more than 100 people, including several Wayne Memorial Hospital employees, joined in the second annual walk and raised 15-hundred dollars more than the year before. They collected pledges and sponsorships to the tune of $8500 to raise awareness and support programs to prevent suicide.

Northeast Pennsylvania has some of the highest suicide and suicide attempt rates in the state. Statistics from a recent Wayne-Pike Assessment study, coordinated by Wayne Memorial Hospital, show suicide rates in Wayne County as high as 18% and in Pike, close to 15%.  The state rate, according to the Suicide Prevention Resource Center is approximately 11.6%.

Many of the walkers admitted they were there because they knew someone who had committed or attempted suicide, and “it hurts so many people when even one life is lost,” said one participant.

Proceeds from the Out of the Darkness walk will go to the American Foundation for Suicide Prevention for research and local suicide-related programs, such as those dealing with bullying and mental health. Mental illness and mood disorders account for 93% of all suicides.

Currently, there are two support groups in Wayne and Pike counties. One, Survivors of Suicide Loss, meets at Wayne Memorial Hospital the 4th Wednesday of every month. For more information about either group, contact Linda at Whrabbit3@aol.com or Jody at 570-251-3208 (work) or jmiller.sg2010@yahoo.com.