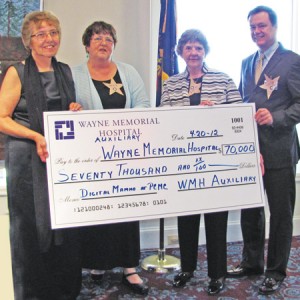 Honesdale, PA – At its annual check presentation to Wayne Memorial Hospital, the hospital’s Auxiliary surprised everyone with a second check for Wayne Woodlands Manor, Wayne Memorial’s long-term care home in Waymart. It was the first time the Auxiliary recognized the nursing home with an annual donation. Both checks represent the hard work of the Auxiliary over the past year. The hospital received $70,000 and Wayne Woodlands Manor $10,000.

“I worked in long-term care for many years,” said Auxiliary President Sandy Kline, “and it occupies a special place in my heart. Thankfully, my fellow Auxilians agreed with me to help support the good work of Wayne Woodlands Manor.”

Marion Swencki, RN, nursing home administrator, was overwhelmed with gratitude. “This is such a wonderful gift for us and it could not have come at a more timely moment,” she said.

Swencki said the money would be used to upgrade shower rooms and enhance activities, including the development of a sensory relaxation room for the residents of the 121-bed facility in Waymart.

“Wayne Woodlands is a place where people come to live, and we want to make it as nice and as much fun as possible,” Swencki concluded.

Wayne Memorial Chief Executive Officer David Hoff and Board of Trustees Chairperson Lee Oakes both thanked the Auxiliary, noting the many hours of labor that go into supporting the hospital.

Funds raised by Auxiliary members, who put in close to 20,000 hours of service last year, will help underwrite the cost of digital mammography equipment in Pike County. That equipment was installed and has been operational since the fall of 2011.

The Auxiliary raises funds through its gift shop in the hospital, its “Other Shops” in Honesdale and Hawley, special sales and events such as the annual Mistletoe Ball.

Both checks were presented at the hospital’s yearly Volunteer Luncheon at Ehrhardt’s on the Waterfront in Tafton on April 20th. About 200 people attended, including representatives of almost all the hospital’s volunteer groups: Auxilians, board members, hospice and hospital volunteers, clergy and teen volunteers. The theme of this year’s luncheon was the Oscars, and a red carpet was rolled out to welcome the volunteers.

Auxiliary President Sandy Kline presented miniature Oscar statues to a number of Auxilians. Alison Cosham Winchell won “Best Documentary” for her work on the Auxiliary’s newsletter, Keeping in Touch. The directors of the Other Shops—Sheila Davis, Judy Dunn and Jean Lawlor—won for just that, directing!

All the volunteers, however, were lauded as stars in their own right for the act of giving. “You are all in the spotlight today,” said Emcee Lisa Champeau, public relations manager for Wayne Memorial Hospital, “This is your closeup! Thank you for all you do.”