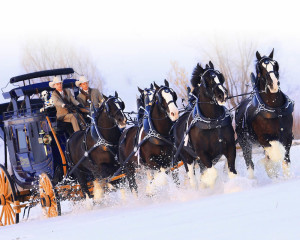 Scranton, PA January 14, 2015 – The Express Clydesdales are coming to Wilkes-Barre on March 13th, 2015 and Scranton on March 14th, 2015. “On Friday, March 13th, they will appear at Mohegan Sun/Pocono Downs race track,” said Franchisee, Jeff Doran, of the Wilkes-Barre Express Office. “Then, on March 14th, they will appear at the Scranton St. Patricks’s Day Parade,” said Amy Clegg, Express Franchisee, Scranton.

Of a rare black and white color, the Express Clydesdales stand 17 to 18 hands high and weigh over 2,000 pounds each. Their shoes are the size of dinner plates and weigh over three pounds each. The Express Clydesdales were named world champions in the eight-horse hitch and the best cart at the World Clydesdale Show in Milwaukee, Wisconsin, in 2012.
In addition to competing on a national stage, the Express Clydesdales have participated in some of the country’s most recognized parades and promotional events, including the Macy’s Thanksgiving Day Parade, the Tournament of Roses Parade, the Fiesta Bowl Parade, Orange Bowl Parade, Hollywood Parade, Calgary Stampede Parade, Kentucky Derby Pegasus Parade, the International Finals Rodeo and the Professional Bull Riders World Finals.
The Clydesdales enjoyed a historic moment when they escorted Prince William and the Duchess of Cambridge in North America at the Calgary Stampede in 2011.

The Scranton Express Employment Professionals franchise began operation in 2009 and shortly after the Wilkes-Barre office opened. Both offices help people find work with temporary and direct hire employees in a variety of fields, including: administrative, commercial, data processing, technical, sales, marketing and more.
Express is on a mission to put a million people to work annually, and worldwide put more than 400,000 people to work in 2013 with more than 675 offices in the U.S., Canada and South Africa. Express provides expertise in evaluation hire, temporary staffing, professional search and human resources and works across a wide variety of industries.
The Scranton office and Wilkes-Barre office are currently accepting applications. For more information, visit: www.expresspros.com.