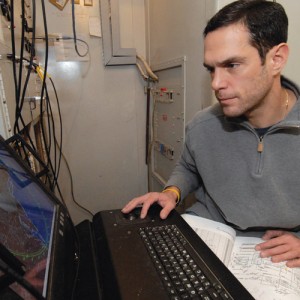 The TPS-59(V)3 provides coverage for all air traffic as well as tactical ballistic missiles in the area and, at 30 feet tall, is the largest radar system in the Marine Corps.  The mobile radar supports anti-air warfare operations, enroute traffic control to a distance of about 300 nautical miles and theater missile surveillance to about 400 nautical miles.

“We will repair and test all the RF (radio frequency) equipment, including transmitters and receivers, and power supplies,” said Electronics Engineer Rick Bekanich of the Production Engineering Directorate (a resident of Dupont). “Tobyhanna will also repair mechanical components as well, such as motors, gearboxes, antennas and antenna drives.”

One of each system is here now and once they are repaired, they will be tested at the depot’s new radome and tower facilities on Powder Smoke Ridge.  Bekanich said the depot will repair and test two TPS-59s and three TPS-63s per year.

“We will also repair and test what are called ‘secondary depot repairables,’” said Orefield resident Ed Panner, an electronic integrated systems mechanic in the Intelligence, Surveillance and Reconnaissance Directorate. “Those are radar components, but not entire radars.”

Four technicians spent months at Maintenance Center Barstow (MCB) at Barstow, Calif., for on–the–job training on the systems and trained other technicians when they returned.  Panner noted that the new mission is not difficult for technicians, but establishing processes has proved challenging.

“Everything has to be First Articled,” he said, referring to the process by which depot personnel show customers that they can repair a system or component correctly, called First Article Testing.

A hot mockup, a working system used for testing, will be used to assist in troubleshooting AN/TPS-63B system and components.

About 5,600 personnel are employed at Tobyhanna, which is located in the Pocono Mountains of northeastern Pennsylvania.  Tobyhanna Army Depot is part of the U.S. Army CECOM Life Cycle Management Command.  Headquartered at Aberdeen Proving Ground, Md., the command’s mission is to research, develop, acquire, field and sustain communications, command, control computer, intelligence, electronic warfare and sensors capabilities for the Armed Forces.

CAPTION: Jessup resident Ryan Armezzani, an electronics mechanic at Tobyhanna Army Depot, verifies operation of the Plan Position Indicator of an AN/TPS-63B Medium Range Surveillance Radar ‘hot mock up’.  The mock up is a radar system that will be used to test TPS-63B components.  Armezzani works in the depot’s Intelligence, Surveillance and Reconnaissance Directorate.  (U.S. Army photo by Steve Grzezdzinski)