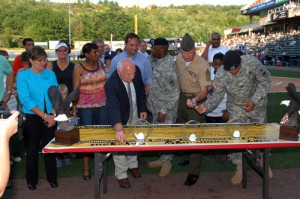 Tobyhanna Army Depot, PA. — Military and community leaders from Northeastern Pennsylvania, along with scores of baseball fans, signed the Army Community Covenant during a Heroes Appreciation event before the start of a Scranton Wilkes-Barre Yankees baseball game.