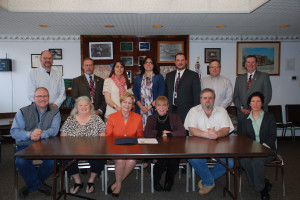 Calling Honesdale Roots & Rhythm  a “gift to the community” and an “outstanding event,” the Wayne County Commissioners issued a Certificate of Recognition to the festival’s organizers on the occasion of the event’s 10th anniversary coming up on June 20th.

“How many times have you been told over the years ‘this could never be done’?, Commissioner Jonathan Fritz asked Roots & Rhythm board members, several of whom have been with the event since day one back in 2006.  Gail Tucker, executive director of The Greater Honesdale Partnership and one of the festival’s co-founders, said a lot of people really didn’t think they were serious about launching a festival that brought high-quality music and arts to Honesdale for free.

“But we did it,” said Brian Fulp, chair of this year’s Festival and also one of the original organizers. “And it’s really grown, thanks in large part to sponsors such as yourselves, our volunteers and the community. When we started in 2006, about 2,000 people turned out. Last year, we had close to 6,000 people who came out to hear the music.”

Each of the commissioners seemed to have a memory of one or more of the festival’s concerts.

“My father didn’t attend a lot of concerts, but when I took him to see L’il Ed and the Blues Imperials at Roots & Rhythm in 2011, his eyes just lit up,” said Commissioner Fritz. “It was truly something to see. He was very appreciative.”

“Music can bring so many people together. It’s really common ground,” added Commissioner Brian Smith, who is a musician himself. “No matter what your differences, you can all sit and hear the music together.”

“I am not a musician,” chimed in Commissioner Wendell Kay, “but this festival does bring quality music and art to Honesdale and it’s a great benefit to our rural community.”

Over the years, Roots & Rhythm has become an independent, non-profit, tax-exempt organization and won awards for its “green efforts” to recycle.

The headliner for this year’s event is the Grammy Award winning band, The Kentucky Headhunters. They’ll be preceded on the main stage in Honesdale’s Central Park by The Alexis P. Suter Band, Professor Louie and the Crowmatix, and Chrissi Poland. Prior to the main stage kickoff around 1:30pm, local bands will play along Main Street starting at 10:30am  The family-friendly event also includes laser tag, “Tunes & Tales” storytelling with hands-on demonstrations of “living history,” and Honesdale Rotary’s Beer & Wine Garden.

Commissioner Smith was so enthusiastic about this year’s headliners that the Roots & Rhythm Board voted unanimously to have Smith introduce The Kentucky Headhunters on stage.

The commissioners issued the certificate at their regular weekly meeting on April 30th. For more information about the festival, including opportunities to volunteer, visit honesdalerootsandrhythm.com.