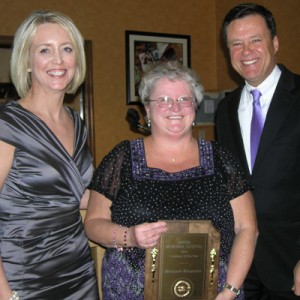 A nurse with a “special charm”

Honesdale, PA – Mary Ann Carpenter, RN, a nurse at Wayne Memorial Hospital for 37 years, is Wayne Memorial Hospital’s Employee of the Year 2010. Carpenter was chosen from among 12 Employees of the Month at the hospital’s annual gala March 26th, a party that had been postponed from February 5th due to weather. It was a long wait to hear who won, but for the veteran WMH nurse, it was still a very special moment.

“This is a real honor,” said Carpenter, who attended the party with her husband Paul.  The mother of two sons and grandmother of two hails originally from Exeter in Luzerne County, but she has been in the Honesdale area since 1974—“not long after the Agnes flood of ’72,” she recalled.

Carpenter, who trained at the now-defunct Mercy Hospital School of Nursing, works primarily in Pediatrics.  She was nominated to be last year’s Employee of the Month of April by Barbara Richter, nurse aide, who wrote, “Mary Ann has a special charm with the children she cares for. She is a loving, caring, professional… and very dedicated to her position. If a child of mine were to be in the hospital, I would want Mary Ann to be the nurse caring for them.”

More than 200 people turned out for the hospital event at Woodloch Pines, Hawley, including many of the other employees of the months of last year. They all cheered Carpenter as she received her plaque.  She also took home a monetary gift and will be “immortalized” on a wall at Wayne Memorial dedicated to employees of the year.

“Many things have changed since I started here,” Carpenter reminisced, “but one thing that hasn’t changed is the quality of the people. Everyone is very friendly and patients say that all the time.”