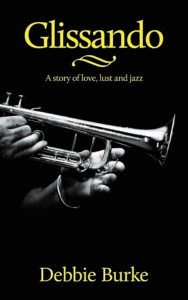 EAST STROUDSBURG, Pa – Local editor and author Debbie Burke (The Poconos in B Flat) has done it again, with her first novel now under contract.

Glissando: A Story of Love, Lust and Jazz has been signed by Waldorf Publishing with a release date of July, 2018.

Whereas The Poconos in B Flat was a historic look at the rich jazz legacy of the Delaware Water Gap region (featuring interviews with the likes of the late Phil Woods, Bob Dorough and David Liebman), Glissando is a work of fiction. The story is a “sharp slice of middle-aged angst amid re-discovered lust, set against a jazz backdrop,” Debbie notes. The title describes the slow and sultry slide from one note to another, often found in jazz.

Pre-publication reviews have already been favorable, including this one from New York Times’ bestselling author Michael Levin: “Glissando is fun and feels very real. Ms. Burke knows her stuff.” Jazz radio host and vocalist Lezlie Harrison at WBGO (Newark) calls it “a supreme jazz love story that swings with a deep appreciation for the music and its practitioners.”

“I fell in love with jazz in my early 20s and have always been inspired by the musicians’ stories,” says Debbie. “Last year, I started a jazz blog with Q&A’s of heavy-hitters like Christian McBride and Aziza Miller. It’s been a blast to speak to them and get an inside look into their passion for music.”

Glissando was snapped up by her publisher within one day, completely surprising Debbie, whose research showed that most pitches to publishers and agents drag on for months or go unanswered.

Her next step includes attending Book Expo America at the Javits Center in New York City later this month, where she will meet with book buyers and other authors. She will also continue her speaking engagements about book publishing like last month’s Entrepreneurship Panel at East Stroudsburg University.

Debbie, who is originally from Brooklyn, moved to the Poconos 20 years ago and started playing alto saxophone in 2006. She has a broad career in print, publicity, and journalism; was the former editor of the Pocono Business Journal; and is now the editor of the lifestyle magazine Local Flair. Her jazz blog can be found at www.debbieburkeauthor.com.