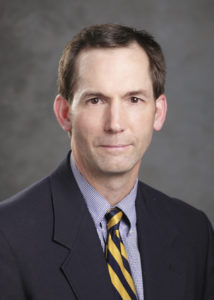 The article, “Cervical Contribution to Shoulder Impingement,” appeared in the November 2016 edition. In it, he studied cervical spine involvement in subacromial impingement regarding impaired rotator cuff function in two athletes who use overhead motion – a high school football quarterback and a collegiate swimmer.

He co-authored his first article for the Journal, “The Incidence of Low Back Pain in NCAA Division III Female Field Hockey Players,” in 2012.

A resident of East Stroudsburg, Dr. Pheasant holds a Master of Science in physical therapy from Arcadia University, Glenside, and earned his Ph.D. in applied biomechanics from the University of Toledo, Toledo, Ohio. Dr. Pheasant’s research and clinical interests include the study and management of spine and shoulder disorders. He has been a member of the faculty at Misericordia since 2000. He teaches courses in kinesiology and musculoskeletal physical therapy.

For more information about Department of Physical Therapy at Misericordia University, please call (570) 674-6400 or visit www.misericordia.edu/pt. Founded by the Sisters of Mercy in 1924, Misericordia University is Luzerne County’s first four-year college and offers 43 academic programs on the graduate and undergraduate levels in full- and part-time formats. Misericordia University ranks in the top tier of the Best Regional Universities – North category of U.S. News and World Report’s 2017 edition of Best Colleges, and was designated a 2017 Best Northeastern College by the Princeton Review.