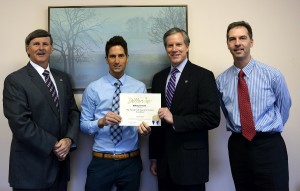 Lewis J. Critelli, President and Chief Executive Officer of Wayne Bank, is pleased to announce that Justin Roach has been awarded the Presidential Award for Excellence.  This prestigious award is presented to Wayne Bank employees who show exceptional levels of dedication and service in their positions with the bank.

Justin joined Wayne Bank in October 2014 and works as the Social Media Technology Specialist, including performing the bank’s graphic design work at the main office in Honesdale.

According to Mr. Critelli, “This award is one that gives me great pleasure to present, as the recipient must be nominated by a fellow employee.  I am delighted to present the Presidential Award for Excellence to Justin Roach, for working hard and applying his talents towards improving the quality of the bank’s website and social media engagement.  Additionally, Justin’s outstanding efforts on the bank’s advertising, promotional, and reference materials have been widely recognized by our employees, customers, and the public.”

Justin is a graduate of Honesdale High School and has a degree in Communications from the University of Scranton. He previously managed social media for the University of Pittsburgh and has long list of notable graphic design achievements including album covers for several popular musicians. The primary passion competing for Justin’s devotion to his work are the Pittsburgh Penguins.

Wayne Bank is a subsidiary of Norwood Financial Corp., Member FDIC, and is located in Honesdale, Pennsylvania. The Bank has fifteen Community Offices in Wayne, Pike, Monroe, and Lackawanna Counties. The stock trades on the NASDAQ Global Market under the symbol – NWFL.