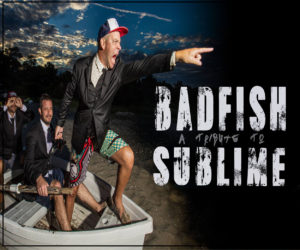 Tweet
Badfish, a tribute to Sublime to perform at the Moosic Festival on August 18, 2018 at 11am.  Learn more at www.badfish.com .  Over the past 17 years, Pat Downes, Scott Begin, and Joel Hanks, collectively known as Badfish, have traversed borders, adopted friends, cruised highways, popped tires, loitered in parking lots, stormed clubs, blazed festivals, and raised the decibel level across their broad tour terrain. Their mission, throughout their eminent career, has remained the same: bring the awesome music and message of Sublime to their spirited fans, wherever they may be. In paying tribute to one of the most galvanizing musical acts in history, Badfish try to revive the Sublime experience by keeping faithful to their down-to-earth, punk rock attitude. Eschewing wigs and gimmicks, Badfish’s philosophy is to deliver Sublime’s music faithfully, spread good vibes, and push the envelope of performance to create a concert experience that surges with energy and originality.
Formed at the University of Rhode Island in 2001, Badfish have gone from packing fraternity basements to selling out prominent venues across the country, including House Of Blues clubs across the country, New Jersey’s Starland Ballroom, Town Ballroom in Buffalo, and Revolution in Fort Lauderdale. In the process of mastering their act and multiplying their fans, Badfish have passed many milestones, including the recording of three live albums, performing with musical heroes The Wailers, and sharing the stage with members of Sublime, including saxophonists Todd Foreman and Tim Wu, and Sublime’s original drummer Bud Gaugh. While they’re proud of these achievements, their focus remains on their audience. Whether they’re playing a 50-person barroom or a raging three-day festival,  Badfish strive to rock the house. No matter the size (or smell) of the venue, Badfish aim to throw a party at their shows that will bring together their eclectic listeners and conjure the thrill and the power of the music of Sublime.