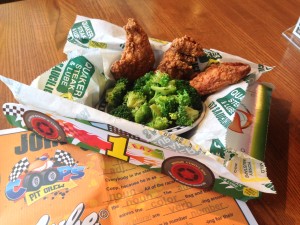 SHARON, PA. (March 10, 2016) – Quaker Steak & Lube®, or The Lube® to loyalists, the award-winning casual-dining concept known for its Best Wings USA and more than 25 signature sauces, is inviting families to celebrate Easter weekend with some bunny special at its New Jersey locations in Brick, Edison and Pohatcong.

On Saturday, March 26, families can race over to The Lube for an Easter Egg Hunt at10:30am. Families should remember to “BYOB” – bring your own basket – so kids can explore the restaurant for hidden treasure once given the green light. Guests who visit the Brick location will also have the opportunity to take photos with the Easter Bunny. Registration is not required, but families wishing to participate should arrive on time as eggs are limited.

For an extra egg-travagant weekend, The Lube is also offering a kids eat free special onSunday, March 27 for families that dine in at its New Jersey locations. Families will receive up to two free Kids’ Meals with each adult entrée purchase for children ages 12 and under. Kids can choose any entrée on the Kids Lube Cruiser menu, with options including Grilled Boneless Wings, Top Gear Tenders, the Chevy Cheeseburger and more, and “tune it up” with their choice of sidecar, such as carrots, Jell-O or crispy fries, and soft drink, low-fat milk or chocolate milk. The Lube offers a range of options that are Kids Live Well-approved.

Quaker Steak & Lube features a lineup of delicious menu items, including award-winning wings, beefed-up burgers, custom-built combos and leaded or unleaded beverage options.The compelling décor, including race cars suspended from the ceilings, motorcycles, Corvettes and motor-themed memorabilia, combined with its craveable food and SuperCharged events, has created a cult-like following for The Lube® for more than 40 years.

Founded in 1974 and built in an abandoned gas station in Sharon, Pa., Quaker Steak & Lube® has expanded across the United States. The unique décor, including gas station memorabilia, classic cars, motorcycles, race cars and corvettes suspended from the ceilings combined with the crave-able food and high-octane events has afforded The Lube® a cult-like fan following. Today, Quaker Steak & Lube® has become one of the fastest-growing restaurant chains in the country, and has won hundreds of national and international awards for its wings and more than 25 different wing sauces.

Established in 1985, Doherty Enterprises, Inc. is recognized as the 68th largest privately-held business in the New York Metro area by Crain’s Business and the 10th  largest franchisee in the United States as ranked in the Restaurant Finance Monitor, operating eight restaurant concepts including: Applebee’s Neighborhood Grill & Bar, Panera Bread, Chevys Fresh Mex, Quaker Steak & Lube, Noodles & Company, IHOP, and two of its own concepts, The Shannon Rose Irish Pub and Spuntino Wine Bar and Italian Tapas. In 2015, Nation’s Restaurant News ranked Doherty Enterprises as the 78th largest U.S. Foodservice revenue company, up from 85 in 2014. To date, Doherty Enterprises owns and operates over 160 restaurants in northern, southern and central New Jersey, Long Island, Queens, Brooklyn, Staten Island, Florida and Georgia – including newly acquired locations in the Miami area. The Doherty vision is to be the “Best Food Service Company in the Communities We Serve” and its mission is to “Wow Every Guest Every Time, Wow Our People, Wow Our Communities and Wow Our Suppliers.” (www.DohertyInc.com).